It is already half way through January, and winter is still slow in making an appearance. We might finally get our first snow in the next couple of days. For someone who works in an unheated workshop, it has been a nice chance to get some more wood worked. At the same time, I am also looking forward to seeing the snow covered trees and taking a hike in the peaceful quiet following a heavy snow. Hopefully, I will get a few more weeks to work all day outside and have enough pieces piled up to finish when it finally gets truly cold.

For now, my silver grain inlay side plate project is approaching completion one or two plates a day. As I mentioned in the previous post, it has been a mixed bag as to the results. I have totally failed my attempts to use the differences in drying speed to adhere the leaf only in the grain. Maybe next time I will have better luck. 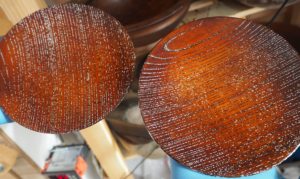 On the other hand, I have found better success in using the traditional method of adhering the leaf and then wiping it off of the high spots. The first five or so plates ended up with silver only in about half of grain, but I am starting to get the hang of it. It takes a very subtle touch. It is not quite what I envisioned when I started several months ago, but the results are the same. After I practice on a few more plates, I will try my hand at a larger bowl next week or so.

The other set of lacquerware plates are also coming along rather well. The base layer is finished, and I have started the brushed layers. My intent with these is to decorate as kinma or chin-kin. Kinma is engraving the lacquer and then filling the engraving with colored lacquer. Chin-kin is again engraving the lacquer, but the engraving is then highlighted by adhering gold, silver or other leaf. However, to do these, it is necessary to build up a thick layer of lacquer, which means applying 5-10 coats for chin-kin and 10-20 coats for kinma. To help speed up the process and make my life a little easier, I decided to make several new additions to my workshop. First is a rotating rack in the curing box. It is standard equipment in most large lacquer workshops in Japan. It helps eliminate runs during drying among other benefits. 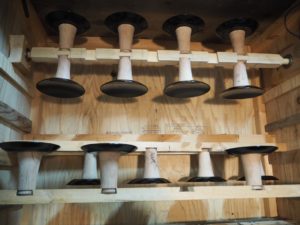 For me, applying a thicker coat means less sanding between coats, as well as fewer coats. It is a win-win. To start, I make one rack that can be automatically rotated with a small motor and another two racks that are manually flipped by hand. They have only been in use a few weeks now, but I am already wondering how I ever did without them.

The other new piece of equipment is bacially a manual lathe. I used the headstock from a miniture lathe, so I am able to use a standard chuck. Previously, I used a special suction cup held in my hand when brushing on the lacquer. It worked just fine, but it could be a little slow and uneven, particularly around the edges. Now, for the cost of two pillow block bearings and some scrap wood, I can even the lacquer without stopping from the front all the way through the back side. I have a feeling that this lathe will be used quite often. I already plan on using it when I apply the base layer on the inside of the small sake cups next week. 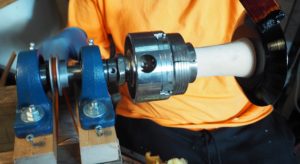