As fall fully sets in, it was once again time to harvest the rice. I take the old fashioned approach to harvesting my rice. These days, almost everyone uses a combine for the harvest because it is so easy and fast. Growing rice in Japan is much like growing grain in the US, it is only profitable on a huge scale. This tends to lead people to pursue scale to the detriment of flavor. All of my neighbors, down the the very last one, swear that hanging the rice to dry for a week or so results in much better tasting rice compared to that harvested with a combine. Rather than spend a small fortune on a combine, I decided in my first year to take path of most effort.

The harvest starts with a piece of equipment called a binder, which cuts the rice and binds it into standard size bundles. To be honest, I have watched it work more than a hundred times, but I still have no idea how the knot it tied, it all happens so fast. This is typically my day of dreaming. I dream that this will be the year of the huge harvest and that all of the time spent weeding paid off. 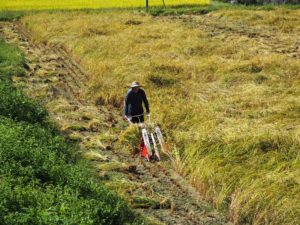 After all the rice is cut and bound, it is time to hang it to dry. The drying rack is make from tree limbs and bamboo. I am getting better and setting everything up, but it is definately an aquired skill. The first year, I spend half a day trying to get two lengths of bamboo to stay upright. It would be OK with no weight on it, but once a few bundles of rice were hung, it would promptly fall right over. I eventually headed over with my head low to a group of neighbors playing crochet nearby. They very nicely pointed out what I was doing wrong and set me on the right path. 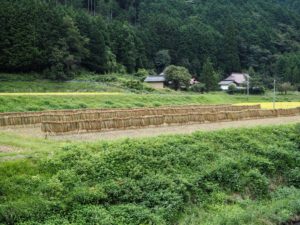 This year, everything went fairly smoothly, and we were done with the harvesting and hanging in a couple of days. However, a typhoon formed soon later and headed this way. I thought I would be lucky as it shifted course to the north and the forecasts improved, but the wind was still much stronger than I expected and about a third of the total length fell over and had to be repaired the next day

Based on this experience, I was determined to get the rice harvested before the next typhoon, so just before the next, I spent another day harvesting all of the rice. In years past, this has been the day that usually bursts my dreams of a huge harvest. Surprisingly, this year was much better than expected. Maybe it was the fertilizer or maybe it was just good weather, but for the first time, my dream lived on. All in all, it was a satisfying year. I will still reflect on what I should do better next year, but for the first time, I think I am making progress. 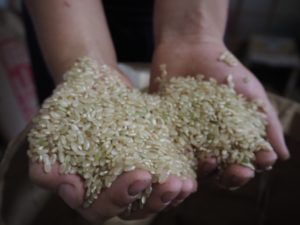