By
dndwoodturning
Posted in
English blog

November is over and what a busy month it turned out to be. I had planned a relatively relaxing month mainly of rough turning and getting the house ready for winter, but due to my cousin gratiously agreeing to appear at a local craft sales event next week, my plans were suddenly upended. It’s one thing to participate in events rather unprepared on my own, but I wanted to make sure my cousin has an enjoyable day.  This started my rush to finish up several in-process bowls and try to get them out the door in time. Plus, in order to make the day unique, I wanted something new. The first on the list was finishing up the spiral rim bowls. These mark the second attempt at this style. Last year I used gold leaf in the spirals. It worked, but the spirals are too deep, which led me to the idea of using colored lacquer. In the new set, I painted colored lacquer over the entire rim and when sanded off the high areas to reveal the spiral pattern. The bowls were then given several brushed coats of lacquer. These bowls should be beautiful in a few years as the lacquer dries more and the yellow spiral becomes more clear. 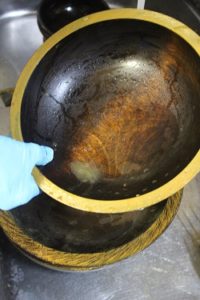 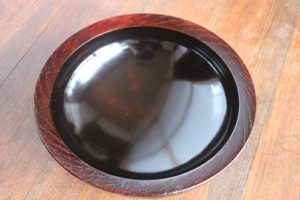 The next bowl was a small, beaded rim bowl that was dyed black. I wanted to give it a special touch, so I decided to try use some of the silver leaf I have on hand. The silver leaf is randomly torn and adhered to the surface before the lacquer dries. Also, although it is not visible in the pictures, I have sprinkled metallic powder on the inside and out to alter the appearance slightly, as well as highlight the grain once the lacquer dries. I look forward to evolving and testing the limits of what is possible with this style finish more this winter. 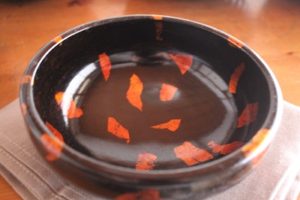 Overall, it was a busy month, but fulfilling looking back on it. In many ways, it marked my first true steps into decorative lacquer, which is the direction I plan to take myself while still making things that are practical to use.

The past week or so has offered quite a bit of time for idle thought during monotonous tasks such as drawing circles on bowl blanks or carrying wood. The one thing that got me thinking the most is the recent trend in Japan towards sharing everything on Instagram to the point that many people think about how something will look on Instagram before they do or buy it. It struck me because somebody mentioned that the silver leaf bowl was neat and would look good on Instragram as he took a picture of it. Usually, when somebody compliments my work, it feels good. However, it may have been the fact that he made no mention whether or not he actually liked it, just that would look good on SNS, but being told my bowl would look good on Instagram didn’t make me feel good, bad, or anything in particular. It makes me wonder a little when SNS transformed from a platform for connecting people to becoming a criteria for how we live our lives.

At the same time, this experience has also reinforced my desire to be a craftsman who make things to the highest quality and attention to details as my talents currently allow, rather than simply creating a trendy design.