I was finally able to get back to the lathe this week for the first time in almost two months, and it sure felt good. It is always enjoyable to see things take shape by my own hands and right before my eyes. This time, I am making a large number of small plates. It is a project that I thought of earlier in the summer as a way for me to finally learn the “proper” way of filling the grain with metallic leaf. I have been told by a woodturner friend of mine that the best way to do it is use the differences in the drying speed of urushi depending on its thickness. In other words, because there is more urushi in the wood grain depressions, it dries more slowly than the thin coat on the surface. This way, it is possible to wait until the surface is dry, and then apply the metal leaf, which will only stick to the urushi in the grain. Like many things, it sounds great in theory, but I have not been able to get the timing right. Don’t wait long enough and the silver leaf sticks to everything. Wait too long and the leaf won’t stick to anything, and the grain is now full of urushi, ruining several months of work.

Up to now, I have used this technique on mostly larger work and have been too afraid of ruining anything. My goal now is to make small plates so that I won’t be too disappointed should I waste time or materials. If I can actually grasp the proper timing, it will be well worth any bumps along the way. I will add updates as this project progresses. 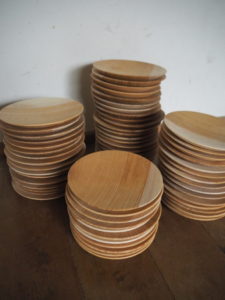 So, I set about making about 30 small plates. About half way through, I decided the design would also be quite nice for the engraving chin-kin and kinma, too, so I have doubled the number. A couple more tomorrow morning and I will be ready to sort through which will become which. Because the plates that will be used for the engraving will be completely covered in urushi, I plan to pick the ones with uninteresting grain or that are slightly mis-shaped.

One of the benefits of making a lot of the same thing is that is a great time to learn. I am starting to incorporate some of the Japanese woodturning tools and techniques, and the shallow curves on these plates were great practice. Two of the tools I like in particular are the hand-held scraper and for lack of a better description, what I refer to as the Japanese scraper, although they refer to it here as a “shaka”. The little hand-held scraper is great for finishing cuts. I use it most with the lathe running in reverse so that I can cut some of the fibers that have just been pushed over, as well as raise the fibers for one final cut with the lathe running in the forward direction. 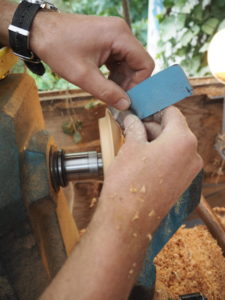 The shaka works mostly like a negative rake scraper when doing side grain work, but depending on how it is positioned and how the tool is rotated, it is possible to change the rake angle, as well as the skew angle. Because of this, it is both wonderfully versatile and wonderfully difficult to master. Also, unlike all western scrapers, the wire edge is created with water or oil stones.

Well, 50 some plates  and one delaminated chip later, and I am finally starting to unlock some of the potential of this tool. I really look forward to making several more this later this fall or winter. 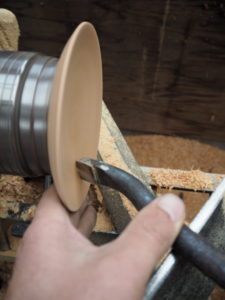 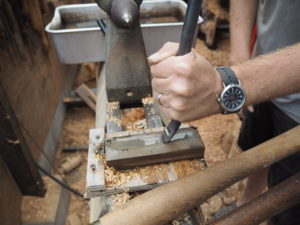